I'm a Journalist from Germany and doing a Blog. For Today I like to do something different to find out how American Students think.

I just ask someone - do you have same time for a interview and here is the result:

May I can ask you - is there anything on me you might laugh, you think it is crazy or different? 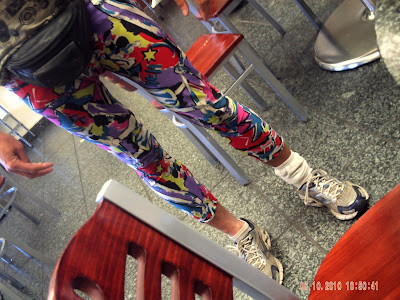 I personally think that the socks part was little funny, considering his whole outfit, on top of that, his lower outfit was little weird as well so that cracked me up.

Do you think all People have to see like the same?

Certainly not, People might have their own personal view. They might see things in a different aspect and might not be important to notice what I did.

Well, when I like to dance, they always say "You need to put a different pants on". What you think about this?

Well, if you just wanna dance around people then your outfit shouldn't make any difference unless you are in a completely embarassing outfit. People have the right to live their life in their own way no matter what. However there are some social and cultural limitations and rules that people should not go over it. Since we live in a group, in a community, I think we have to consider a little about the way, our society look at us.

What are the social and cultural limitations and rules of your Society?

There might be lot of things that people are still not ready to accept. For example: There are still many people out there who do not want to accept gay, lesbian, bisexual, or transgender people. There are people who do not want to eat some specific food because of their culture like, Hindu people do not eat beef. Similarly people do not wanna see some guy dancing naked on the street, which an individual could certainly do but then the society wouldn't accept that.

Do you think I'm Gay?

Not really because I , myself, am a bad guesser. However, I thought that your outfit was little funny.

Do you think, they do not let me dance in these pants because they want to keep Gay's out?

Most Parks in the US only open at daylight hours - do you know why?

Not sure about this.

What you think about that?

They could be doing this because to decrease the crime rate, in one case. However, there might be many things that could be the reason for this.

What are your feelings about 9-11?

That was a totally devastating incident. I might not know about this incident in very detail but in general, this was the biggest incident happened that I ever knew which kept the whole world in terror.

Same People say the US did it by there one to create a war. Pleace respond to that!

I think this is still a controversial thing to discuss no matter how much you discuss and how much you think about it unless you have the power to prove it that someone acutally did it. I think general citizens are not capable to think this kind of thing in a deeper way but it could be done by the US itself to fulfil its own demands.

I like every sort of genres but i would still prefer rock, hard rock and metal songs.

Tell me something about your life!

I am an international student in Saint Cloud for two year now. I am from Hong Kong but my nationality is Nepalese. Coming here was a great experience. Meeting new people with new culture was really challenging. The way I was and the way I am now feels like totally two different persons, hopefully in a better way but this place was able to change me and educate me in so many ways.

THANKS for the Interview.

After lunch I meet another student – this time born in the States to looek on diffrent Thinkings when people came from diffrent cultuares.

I asked him basicly the same questions beside the first one, because he did not noted any unusal thing on me.

After informing him how other people react to my Outfit he stated to that:

So you have been happy when Obama has been elected?

I think that we have taken a huge step in the right direction to achieve what Martin Luther King dream really was. This has been overdue in our society, and is very much welcomed with open arms. This makes me happy, not all the issue that his job has to deal with. He does what he thinks is best for the U.S. people and I trust him.

Well, when I like to dance, they always say "You need to put a different pants on". What you think about this?

I think that some people get uncomfortable when something is different then what they are use to. These social norms can take control of what we find normal, but I support individualist that try and break up the social norms of our society.

What are the social and cultural limitations and rules of your Society?

We as Americans try to practice what our fore fathers have fought for; this is the freedoms that we hold close to our hearts. We have started to misinterpret the true meanings of these freedoms. We however have been slowly getting back on the right track due to the efforts of people challenging the social construction. The biggest problem is that people don’t know what it is like without the freedom.

Pleace give an example what will be over the cultural limitations and rules of your Society?

In recent news people have been protesting at the cemeteries where U.S. soldiers are being buried. These people are protesting about the war effort, and saying what they are doing over there is wrong and for that they will go to hell for it. These protestors are saying that they are using their freedom of speech, and we cannot deny this. To me this is wrong on so many levels, and displays the bad ethics that some people have in this world to deny anyone a peaceful burial.

Most Parks in the US only open at daylight hours - do you know why?

I am really not sure, but I am sure that it might have to do with safety reasons. They could also be trying to regulate the number of people coming in and out. I suppose you also have to take inconsideration that the wildlife do most of their moving around at night.

What are your feelings about 9-11?

It was a sad day in not just American history, but the world as well. I am sure everyone felt the pain on that day, and will always remember where they were on that September day.

Same People say the US did it by there one to create a war. Please respond to that!

I really have no comment on this, due to my involvement in the war. I was in the military at the time the war broke out.

Could you describe the Moment where you heared very first about the attack?

When I had gotten the news my heart dropped to the floor and I felt a sadness that I have never felt before in my life. I knew that my life would be changed from this day forth. I could never describe what really happened in words.

How have the life and training and so on at the Base where you have been stationed changed after that?

You knew that you were going to fight in the war, so you took things more seriously. Some of the changes on base was that inspection to get on to the base was on high alert. The training that we did increase to twice as much as before. Our budget was increased do to the war effort, which provided opportunities for better equipment. This new equipment replaced the outdated Vietnam era equipment that we were issued.

Has the US Army call you to go Oversea?

I was called to go over to Iraq on a few different times throughout my military service. Due to my position I am unable to give specific details.

I am a typical northern Minnesotan so that means that I like the outdoors, and to experience new adventures.

What was your biggest Adventure until now?

Right now I have been trying to hike in 50 mile intervals during open weekend from two harbors Mn to the Canadian border.

Do you have plans for an even bigger one?

I don’t have anything set in stone but I will always look for the next big adventure. But, I guess you could say the biggest adventure is life it self.

THANKS for the Interview. 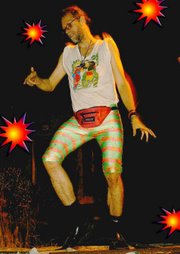